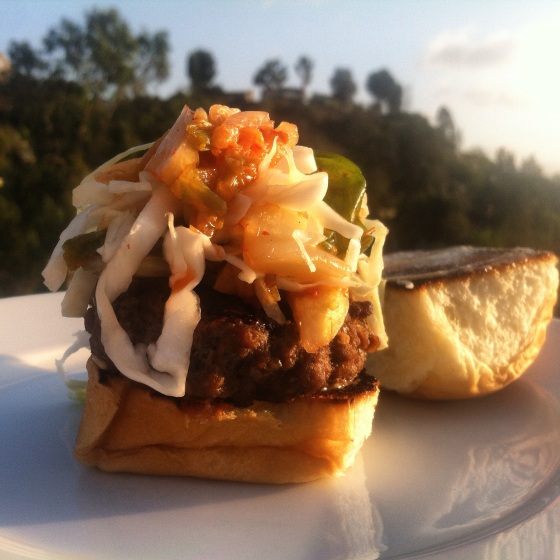 Working in Koreatown has made me start to constantly crave Korean food and want to cook Korean food.  So when the roomies and I decided to have a housewarming party after moving to hipster central, I thought it might be fun to make some sliders flavored with a bulgogi marinade.  I AM A GENIUS.

I have an obsession with Hawaiian sweet rolls, so I had to use them for this recipe even though I was worried the sliders would end up too sweet (since the bulgogi marinade is kind of sweet).  I tried to balance it out with a tart Asian slaw and some kimchee.  I chose to chop up the kimchee so that it’s easier to eat (I hate when I try to bite a piece of kimchee in half and it refuses to!), but you can definitely keep it whole if you prefer.

Side note, as I was making the dressing for the slaw, I realized that it tastes almost exactly like the Asian sesame salad dressing that they sell at Costco.  So if you like that Costco dressing as much as I do, I accidentally found out how to make it!

Although the prep work seems daunting, it’s actually pretty easy, especially if you have help.  I had the bf be my sous chef and form the patties and grill them because I was running so behind on prepping everything else and having the help made things SO MUCH easier.  These little sliders were a huge hit and they ran out super fast!

If you’re trying to get some grilling in before the weather starts to cool down, definitely give this recipe a try 🙂

The journey to becoming Queen of all things gluten free

Baking Joy Into Every Gluten-free Bite

because perfection is just a mere illusion

...and other life adventures!

The Domestic Rebel
from scratch club

If it tastes good, it IS good.